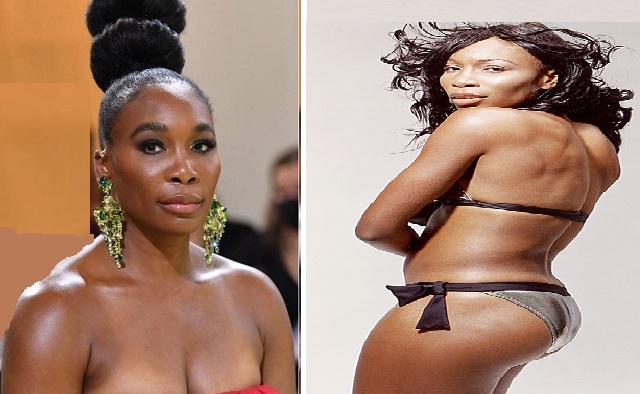 As for her biggest role models, Williams says she really doesn’t have to look beyond her own mother and four sisters. However, “I definitely look up to a different, interesting set of women,” she says. “Of course, who doesn’t love Oprah and Michelle Obama.”

Someone else Williams greatly admires is Anni Albers, the late German artist known for her bold, geometrically patterned textiles and prints. “She ended up having to work in textiles because that was what was kind of accepted during that time,” says Williams. “But she was an incredible artist who really just broke down barriers for women.” Williams also singled out the late multiple world-record-holding Olympic champion Wilma Rudolph, who despite being diagnosed with polio as a child and told she would never walk again, pursued her dream to be an international track and field star: “I don’t know how you become an Olympic champion having polio, but she did. Incredible.”

Williams, of course, is herself an Olympic champion, and on Feb. 25, 2002, became the first Black tennis player to be ranked No. 1 in the world. At 41, she is training for a forthcoming tournament, details of which she declined to discuss at this time.

I asked if she’s thinking about retiring sometime in the near future. “I can’t imagine it’s that far [off] now,” she acknowledges. Williams hasn’t played in a major tournament since competing at Wimbledon last year, so she’s had a small taste of what life might be like when she wraps her career as a tennis pro, having had some time “to do things outside the court.” That included serving as a hands-on executive producer of the Oscar-nominated movie based on her own family, “King Richard,” alongside her sisters Serena and Isha Price. Williams says she was very motivated by that experience to pursue more entertainment projects with Isha. “And there are so many amazing women in Hollywood that would be great to work with,” she says, noting she’d love to collaborate on a scripted project with director Ava DuVernay, who directed ESPN’s 2013 documentary “Venus Vs.,” chronicling Williams’ fight for pay equity in tennis.

“I want to continue to tell sports stories because that’s my nature, but I don’t think you always have to tell a sports story through the lens of sports,” says Williams. “I want to continue to tell stories that resonate with me,” including those aimed at children. While Williams enjoys wearing a producer hat, she is very clear about what she doesn’t want to do on projects: “I will never, ever be an actor. I don’t want to be in front of the camera — ever.” She loves consuming movies — everything from kids films from Pixar to period pictures like “The King’s Speech” — and she says sometimes in bed she finds it “extremely comforting” to watch a TV show like “How I Met Your Mother” repeatedly. “I’ve seen it so many times, and it’s just like 15 minutes and then you’re off to dreamland.”

And, it turns out, she’s musical. When I asked her to tell me something about her that many may not know, she said: “I’m a karaoke queen. I love to sing throughout the day, and I also have a karaoke mic I travel with.”