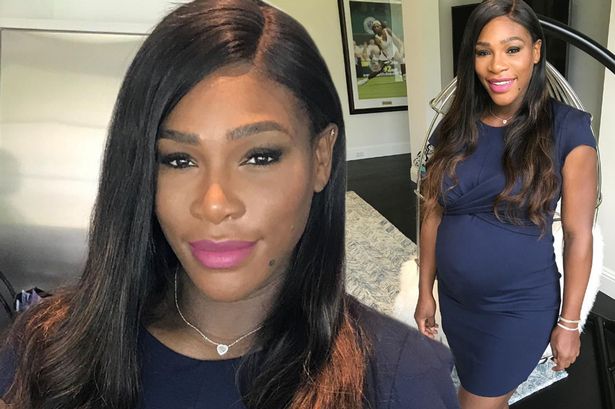 In an interview to Allure Magazine, Serena Williams spoke about her pregnancy. The former world no. 1 gave birth to her daughter Olympia in September 2017 “I loved being pregnant,” confessed Serena. “I loved everything about it.”

“I was one of those weird people that loved being pregnant. Those annoying people. I’m feeling pretty good about my body,” she assured. “I worked hard at it in the past eight months to get back from the baby.

It hasn’t been easy. I’m not 21 anymore. But I did it slow and steady. After I came out [of the hospital], I had a stomach, but I thought, This is kind of cool. I have a stomach because the baby was there”. Serena also reflected on what being beautiful means.

She said, “When I tell her (Olympia) she’s beautiful, I want to teach her that she’s beautiful from the inside. Giving is beauty. Being kind and humble is the ultimate beauty. I want her to know that being strong is never easy.

Serena Williams, the 23 times Grand Slam champion recently hinted possible comeback in the upcoming Wimbledon championship. Although she is yet to make a formal announcement, her fans are already over the moon. However, the rumored tensions between Williams and her coach, Patrick Mouratoglou, might crush this slight ray of hope.

Serena Williams Makes a Shocking Move Recently, Serena unfollowed her former coach and great friend Patrick and fueled the fire of her retirement. People fear now that she has broken her ties with the former coach, she might as well leave tennis. One of her fans posted the same and wrote, “Serena unfollowing Patrick now I’m even more scared she ain’t coming back.” People are flooding social media with probable reasons behind her actions. Some believe that it’s an anger-ridden move from Serena. As Patrick has taken Simona Halep, one of the major rivals of Williams’ under his wings. He announced that he will travel alongside Halep for the clay-court season. However, he also stated he wanted to be in action till Serena is recovering. And hinted that his and Halep’s partnership might be short-lived.

Whereas some believe that the former World no.1 is slowly breaking her ties with tennis and will mark the end of her professional career soon. While there are also people who believe that her unfollowing Mouratoglou doesn’t hold any meaning itself. As she has done something of this sort earlier. Williams a few months ago, unfollowed her husband, Alexis Ohanian. Achievements of Williams and Patrick Duo

The French tennis coach Patrick Mouratoglou is world-renowned for helping players such as Grigor Dimitrov and Stefanos Tsitsipas achieve their goals. And shape the next generations of players such as Coco Gauff. He paired with Serena Williams in 2012 when the American tennis ace was going through some rough patches. Serena had just suffered a first-round opening defeat in French open 2012. Therefore was low on both form and will. From that point, Patrick helped her reach a position where she became invincible. Williams claimed three Wimbledon, three US Open Two Australian Open, and two French Open titles. And the Olympic gold medal was the cherry on the top. Serena Williams’ pregnancy: Serena Williams has been talking about pregnancy and having another baby following the growing up of her first child, Olympia Alexis Ohanian Jnr. When the rumours began to spread that tennis legend Serena Williams is pregnant, it did not take long for many people to deny that this was true.

However, so many people were very shocked when Serena’s publicist, Kelly Bush Novak, officially confirmed that the greatest ever female tennis player is pregnant, although it seems that there were none quite as shocked as the superstar herself. The photo posted on Snapchat with the baby bump and then removed a few mins after had left some doubts about Serena Williams’s pregnancy.

This is a developing story… However, rumour has it that Serena Williams is finally hanging his tennis boots because she’s pregnant with 2nd child. Serena is worried it’s too late to give her daughter a sibling… Serena Williams’ age: Serena Williams is 40 years of age at the time of writing. She will celebrate her 40th birthday on September 26, making her one of the oldest players on the WTA tour.

Serena Williams’ Retirement: Having recorded one of her earliest losses in Grand Slams in nearly a year Serena Williams has given rise to yet another batch of retirement rumours and conversations about her age and longevity on the tour.