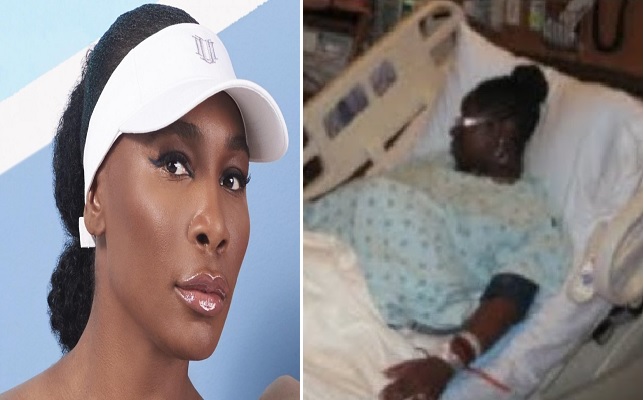 Like any professional athlete, Venus Williams knows that big losses are bound to happen over the course of a long-term career. The world champion tennis pro recently had a disappointing performances: it’s already a big challenge to compete against some of the best tennis pros in the world, but it’s even more frustrating when your own body is working against you with every hit, serve, and volley.

No one knew it then, but while Williams was serving up opponents on the court in 2011, her body was also battling a set of mysterious symptoms she had been experiencing for the past seven years. “I feel like I am a great player,” Williams told The Morning Call while reflecting on her performance after another tough loss. “I am a great player. Unfortunately, I had [to] deal with circumstances that people don’t normally have to deal with in this sport, but I can’t be discouraged by that. I have great tennis in me. I just need the opportunity.”

Williams was suffering from an onslaught of symptoms, including fatigue and shortness of breath. “No matter how hard I worked, I was exhausted, short of breath, and never felt in shape. It was really frustrating,” Williams tells Prevention US. “My symptoms got progressively worse, to the point where I couldn’t play professional tennis anymore.” Later that year, Williams finally received a diagnosis of Sjogren’s syndrome—an autoimmune disease that’s identified by two of its most common symptoms: dry eye and dry mouth. “Unfortunately, that’s typical of people with autoimmune disease,” she says. “They’re misdiagnosed or too sick to function. I literally had professional tennis taken away from me before I got the right diagnosis.” Just like other rheumatic diseases, Sjogren’s syndrome, which affects .5 of the population in Australia alone, can take several years to diagnose, because the dryness and other symptoms can be subtle. “The most common symptom is fatigue and dry mouth or eyes, although those with Sjogren’s may experience muscle aches, joint pain, and inflammation of major organs,” says Paula Marchetta, MD, president of the American College of Rheumatology.

Williams was relieved to finally know what was happening with her body, but she was disheartened to learn that treating the disease wouldn’t be easy. The tennis champ pulled out of the 2011 U.S. Open when disease-related fatigue became too much to bear and was booted out of the top 100 tennis players for the first time since 1996. Instead, she took time to focus on her health. “In the beginning, I just had to wait to get better,” she says. “One of the medications I had took six months to set in. There was another that took one to three months. It was kind of a waiting game until you can go back to what you had been doing.” Dr. Marchetta says that Sjogren’s syndrome treatment is directed at the patient’s specific set of symptoms. “You can control eye dryness with drops, ointment, or an anti-inflammatory drug prescribed by an ophthalmologist. There’s also medication to stimulate saliva.” Her breakfasts usually include smoothies and fruit, as she’s “not a huge eater in the mornings,” but it gets her through practice until she has a lunch and dinner filled with protein, carbs, and veggies. “If it’s leading up to a big match or it’s dinner I’ll eat a little heavier, and occasionally I have some fun with sweets, too. I’m only human!” Following a vegan diet and receiving treatment helped her feel better, but the tennis pro struggled to play well following her diagnosis. Williams didn’t reach Grand Slam quarterfinals in 2012, 2013 and 2014. Though many considered her performance during those years a strong comeback after illness, it wasn’t until 2015 that Williams finished in the top 20. Two years later at 37—an age when most players hang their rackets—Williams found a way to win again. She reached two Grand Slam finals and became No. 5 in the world.

Today, Williams remains one of the best tennis players the sport has seen. With 49 singles victories (including seven Grand Slam titles), the athlete has dominated the sport alongside her sister Serena Williams. Together, the duo has represented U.S. at the Olympic Games four times, collecting four gold medals. After winning her fifth medal—a mixed doubles silver at Rio 2016—Venus became the most decorated tennis player in Olympic history since 1896. “Any moments of the Olympics, especially the ones that I played with my sister, those are the most amazing,” Williams says. “I don’t know if I understand the experience of having a career without Serena.”

Despite all of her success, Williams’s career is nowhere near finished. Wimbledon 2019 may not have been a career peak, but the tennis champ is getting ready for her next Grand Slam tournament, the U.S. Open, in August. “There are times when things are better and times when they’re not as good, that’s when you have to listen to your body and understand that,” she says. “Life has changed a little bit, but it doesn’t mean that you can’t achieve the same things. You just have to be smarter.”

While her recent losses have been difficult, Williams says they have made her wiser and helped her grow as an athlete. “You grow with the wins and the losses. You get wiser and stronger. It’s exciting to be able to play as long as you can and because you’re able to build this wealth of knowledge that you can use,” she says. “I love every single moment of the learning. Some of those moments are painful, but you still learn.”

When asked how she plans to tackle the next few competitions, Williams says, “The past is the past and what I’m working towards is the most important to me. For me, the most excellent victory is still ahead of me.”