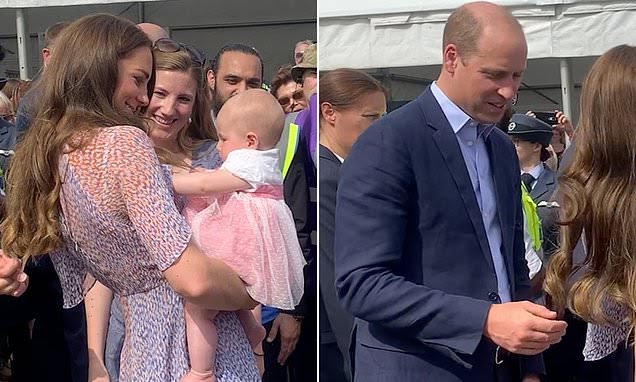 She’s dropped many hints about feeling broody for a fourth child, and yesterday the Duchess showed that her feelings haven’t waned as she doted over a baby during a visit to Cambridge with Prince William.

During their final appointment at the County Day, at Newmarket Racecourse, Kate was seen looking delighted as she held the youngster, who was wearing a pink dress.A video of the sweet moment shows the mother-of-three smiling at and chatting with the baby, who she asked if she could hold, telling her mother: ‘I love babies.’ Meanwhile, Prince William was seen loitering nearby, watching his wife as she cuddled the tot, and Kate was certainly in no hurry to go when he urged her to move on. The sweet moment occured yesterday when Kate spotted a wellwisher holding her baby and asked if she could have cuddle.

The baby’s mother, Marianne Provoost, who had travelled from the Netherlands for the event, said the duchess had asked to hold her child by saying: ‘I love babies.’Her daughter, four-month-old Norah, was handed back to her, with Ms Provoost telling the duchess:

‘Enjoy your day and enjoy your children.’
The video clips shows Prince William appear to gently tap his wife on the arm, saying: ‘It’s time to go’.

However, she took her time saying goodbye to Marianne, before handing the child back.Royal fans were delighted by the moment and took to Twitter to joke about it, especially Prince William’s reaction.

‘It’s making William a little nervous. He’s nervous with three. Another one might tip him over the edge,’ one wrote.
‘Poor William,’ another added. ‘He gets very nervous when Catherine starts getting broody.’

A third chimed in saying: ‘Look at William desperately telling Catherine it’s time to go.’ It was not surprising given the Duchess’ recent comments about potentially having a fourth child. During her visit to Copenhagen’s Children’s Museum earlier this year, Kate admitted she felt ‘broody’ after meeting with two eight-month-old baby boys and their parents. She joked that husband Prince William worries about her working with under-one-year-olds because she returns home wanting ‘another one’.

Their attendance at yesterday’s fair was action packed, with the royals seen playing a football game, and quaffing beer as they enjoyed the show.

Kate, who was wearing a recycled blue LK Bennett patterned dress, and wedge heels, had no problem hitting the target, much to the pleasure of the assembled crowds.

William also managed to get his shot on target.